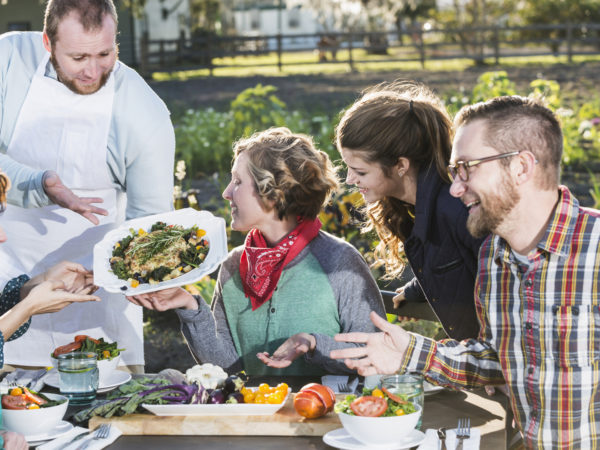 Your question is timely. A newly released report from Sweden addresses the issue by describing how switching to a diet of organic foods affects levels of 12 pesticide residues stemming from earlier consumption of conventionally produced foods. The Swedish Environmental Research Institute carried out the experiment with a family of five: the parents and three young children. Earlier research had shown that pesticide residues were present in the urine of 90 to 100 percent of Swedes tested.

During the first week of the study, all the food family members ate was conventionally produced. For the following two weeks, they consumed only organic food, including meat, fish, vegetables and fruit. Throughout the three weeks family members submitted urine samples every morning that were tested for residues of 12 pesticides.

Because the family had used detergents containing triclocarban, an antibacterial agent, this exposure had to be considered independently, since the chemical degrades in the body into the metabolite 3,5-dichloroaniline (3,5-DCA). For this reason, the family switched detergents during the organic phase. They also agreed not to wear new clothes or use new bedding or towels, all of which can contain chemicals that could be absorbed. The father used snuff, which the researchers replaced with an organic version. The family already used environmentally friendly shampoos, conditioners, and skin care products.

The results of the switch to organic foods were dramatic. On average, the pesticide loads of all family members dropped significantly, and the researchers reported that some of the chemicals fell to undetectable levels after only a day or so of organic eating. They also found that, on average, pesticide levels dropped slightly more in the children than in the adults.

The researchers also reported that levels of pesticide residues found in urine while the family was eating conventionally produced foods were “well within acceptable levels,” meaning that a single substance is unlikely to pose an immediate health risk to humans. What we don’t know is the risk posed by repeated or prolonged exposure to low levels of these compounds. It’s also unclear if residues of multiple chemicals could interact each other, leading to a stronger (or weaker) effect than they would have individually. So far, we have no reliable methods to assess risks, if any, posed by this so-called “cocktail effect” of combined chemicals.

While this was a small, pilot study, the results should prove persuasive for those considering a switch to organically produced foods. And they should provide food for thought for those who don’t see any benefit to making the change.