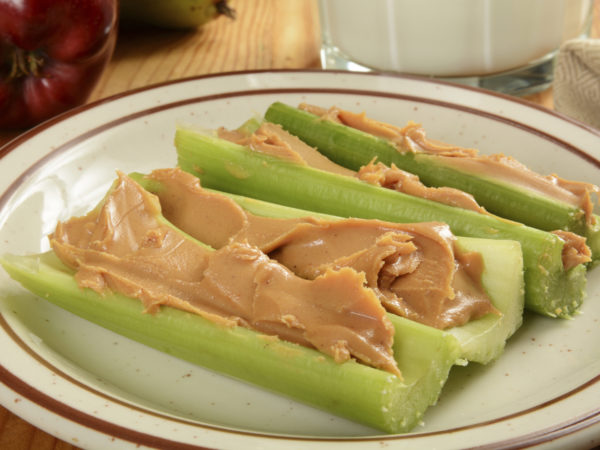 It’s true that celery contains some natural toxins – it produces psoralens, compounds that sensitize the skin to the harmful effects of ultraviolet radiation in sunlight. You only have to be concerned about these when you are dealing with raw celery – the psoralens are broken down by cooking. These toxins come from a common fungus called pink rot that affects celery. Pink rot is responsible for the brownish patches that discolor many celery stalks. If you avoid celery with the brownish patches, you shouldn’t have to worry about the psoralens.

Aflatoxin is another natural toxin produced by certain strains of Aspergillus flavus and A. parasiticus, molds that grow on peanuts stored in warm, humid silos. Peanuts aren’t the only affected crops. Aflatoxins have been found in pecans, pistachios and walnuts, as well as milk, grains, soybeans and spices. Aflatoxin is a potent carcinogen, known to cause liver cancer in laboratory animals and in Africans who depend on peanuts as a dietary staple.

The U.S. government tests crops for aflatoxin and doesn’t permit them to be used for human or animal food if they contain levels over 20 parts per billion. While we don’t know much about the dangers of long-term exposure to low levels of aflatoxin, we can take comfort in the fact that there hasn’t been an outbreak of liver cancer among U.S. kids, who as you know, consume enormous amounts of peanut butter.

There’s no reason why you shouldn’t continue to eat peanut butter (with celery) in moderation. When you buy peanut butter, look for brands containing only peanuts or peanuts and minimal salt and avoid those with hydrogenated oils, sugar and other additives. Make sure the celery you buy has no brown patches and definitely opt for organic; celery is one of the “dirty dozen” (see the full list below): the crops identified by the Environmental Working Group as having the highest residues of pesticides.

EWG’s list of the dirty dozen: 12 Foods You Should Always Buy Organic