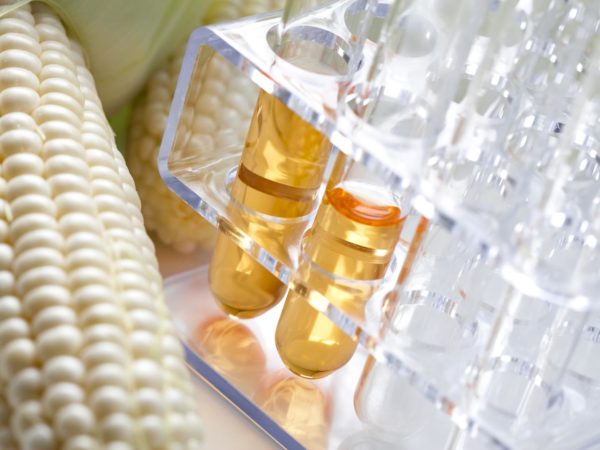 Corn syrup was invented in 1882. It is made by enzymatic conversion of cornstarch to a syrup mostly containing glucose (also known as blood sugar or dextrose). It is available for home use (as Karo syrup and maple-flavored pancake syrup for example) and is used commercially to sweeten many manufactured foods, from salad dressing, drink mixes, and fruit drinks to puddings, ice milk, and tomato sauces. The glucose content of corn syrup can range from 20 percent to 98 percent, but when you see “corn syrup” listed on a product label, you have no way of knowing how much glucose it contains.

Corn syrup that has been concentrated to contain less than 10% water can be described as “corn syrup solids” on a product label. That ingredient is at least 88 percent glucose.

Alternatively, high fructose corn syrup (HFCS) was invented in 1957, but did not come into widespread commercial use until the late 1970s. It is made by using other enzymes to convert glucose to fructose. It is as sweet as table sugar (sucrose) but much cheaper. HFCS was initially considered a “revolutionary” food science innovation because it retains moisture and prevents drying, controls crystallization, and blends with other sweeteners, acids and flavorings. Manufacturers love it, and it is now the principal sweetener used in processed and junk foods – everything from soft drinks and juices to salad dressings, ketchup, jams, jellies and ice cream.

HFCS contains 14 percent fructose. Never before in history have so many people been consuming so much fructose. I am concerned about its possible disruptive effects on metabolism, including its potential to cause insulin resistance. Along with a growing number of experts, I believe that HFCS is a chief driver of the obesity epidemic in this country, particularly of childhood obesity. I deplore our government’s role in making HFCS so cheap through federal subsidies of corn production.

In general, it is best to cut down on foods to which any sweeteners have been added. All of them contribute to the obesity epidemic that is threatening the health of so many Americans. But HFCS is the worst, different from and possibly more dangerous than ordinary corn syrup. I urge you not to buy products made with it and not to let your kids eat them. HFCS is a marker of low-quality foods. Avoid them.