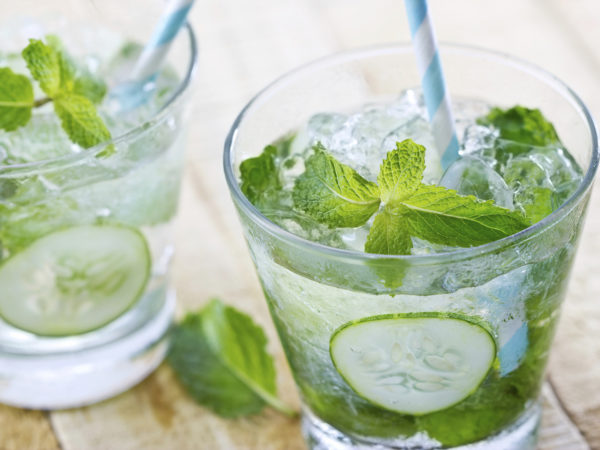 The most common definition of “cucumber water” is plain water to which cucumber slices have been added. It is a pleasant, refreshing drink, but I think the health benefits beyond that of plain water are minimal, at best. Cucumber water is said to improve the appearance of skin. I haven’t seen any medical evidence to back that up. But cucumbers are very low in calories and do provide some vitamin C, beta-carotene, and manganese plus a number of flavonoid antioxidants, including quercetin, apigenin, luteolin, and kaempferol. In animal studies, fresh cucumber extracts have been shown to increase scavenging of free radicals and reduce inflammation, but those effects were from concentrated extracts, not water with added slices of cucumber. When you buy cucumbers, look for firm ones that are bright medium to dark green in color. Avoid those that are excessively large, yellow, or wrinkled at their tips.

I am disturbed by the recommendation to add sliced cucumber to tap water to improve its taste. Masking the taste of your tap water is not a good idea; instead, if the water in your house is disagreeable, you should determine the reason for the “off” taste. Contaminants such as fecal-coliform bacteria, lead, fluoride, chlorine, arsenic and nitrates could be responsible, as well as other microorganisms and chemicals. Don’t rely on the free testing offered by companies selling water purifiers. Instead, use an independent lab. State and local health departments often do free tests for bacterial contamination, but to find out about toxic substances, you’ll need the services of a private testing lab. The analysis will cost about $100, a worthwhile investment if it saves you the expense of installing a water purifying system or detects a real problem.

I discussed your question with Tieraona Low Dog, M.D., an internationally recognized expert in the fields of integrative medicine, dietary supplements and women’s health, and an authority on botanical medicine. She says that she views cucumber water as a pleasant way to increase your water consumption. She likes to combine cucumber and mint. She adds one peeled, sliced cucumber to a pitcher of water along with a few sprigs of mint and puts the pitcher in the refrigerator before she goes to bed. The next day she has delicious calorie-free cucumber-mint water. Dr. Low Dog likes to squeeze a little lime in it before she drinks it.

You can find other ways to make cucumber water online.