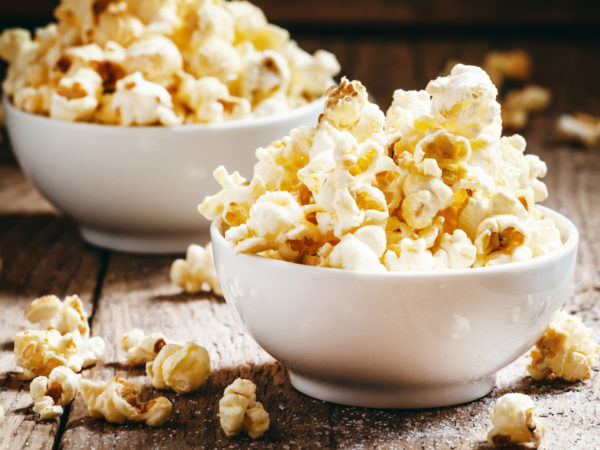 Canola oil is primarily a monounsaturated fat and as such, is healthier than saturated fats or polyunsaturated oils. It is extracted from rapeseed, a plant in the cabbage family. Rapeseed oil is the traditional cooking oil of India and southern China, but the kind we use was developed in Canada to contain less erucic acid, a toxic fatty acid, than other varieties. This Canadian oil became known as canola oil.

I use canola oil in moderation, when I want a neutral tasting oil, but I always look for organic, expeller-pressed brands such as Spectrum’s High Heat Canola Oil. Less expensive products sold in supermarkets have often been extracted with chemical solvents or high-speed presses that generate heat. Both of these methods alter the oil’s fatty acid chemistry in undesirable ways. Furthermore, canola oil producers use a lot of pesticides on their crops, and I suspect that residues find their way into the finished product.

Making your popcorn with a teaspoon or so of canola oil does add some calories – figure about 40 calories per teaspoon. (Plain, air-popped corn provides four grams of fiber per three cups and contains only 20 calories per cup.) Be aware that every tablespoon of oil (of any type) used for popping adds 120 calories and 13 or 14 grams of fat. If you add a tablespoon of melted butter, you increase the calorie count by 100. And every teaspoon of salt adds 2,400 milligrams of sodium, almost twice what we need per day.

When buying commercially prepared popcorn, be sure to check the part of the nutritional information label that indicates the percentage of calories coming from fat. You may find that fat accounts for as much as 50 percent of the calories.

My favorite way of preparing popcorn is to sprinkle it with a little tamari, some nutritional yeast, garlic powder and, sometimes, cayenne pepper. You can also try it with chili powder, a little grated Parmesan cheese or dried dill. (If you do not use oil, mist the popcorn with a bit of purified water before adding dry flavorings to help them stick.)