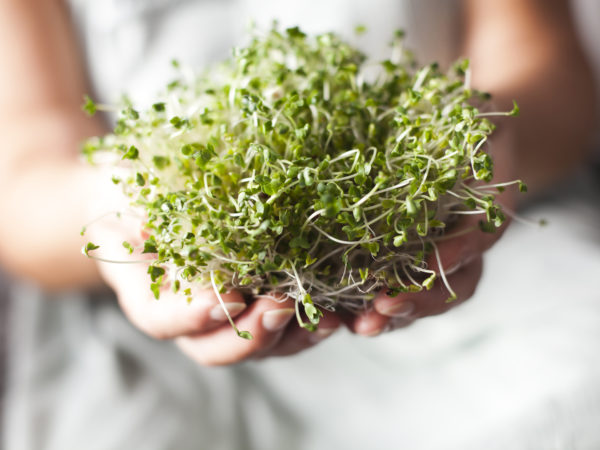 Broccoli sprouts are perfectly safe, even raw, and they are good for you. As a matter of fact, research published in 2011 suggests that combining broccoli and broccoli sprouts might double the anti-cancer effects each can have on its own.  Broccoli sprouts contain an abundance of myrosinase, an enzyme needed for formation of sulforaphane, which is mature broccoli’s cancer-fighting, anti-inflammatory component. Mature broccoli has plenty of myrosinase, too, but it tends to be destroyed in cooking – unless you steam the vegetable for less than four minutes.

A research team from the University of Illinois notes that broccoli powder supplements often don’t contain myrosinase, but if you combine the powder with sprouts, you can prompt sulforaphane formation. They demonstrated this in a small study with four healthy men who ate meals containing broccoli sprouts, other meals containing broccoli powder and then meals with a combination of each. Three hours after the men ate the combination meals, the research team measured higher levels of metabolites in the men’s blood and urine that indicated an almost two-fold greater absorption of sulforaphane.

Elsewhere, researchers have learned that eating two-and-a-half ounces of broccoli sprouts daily for two months may protect against Helicobacter pylori (H. pylori), bacteria known to cause gastritis, ulcers and stomach cancer. A team at Johns Hopkins found that a daily serving of broccoli sprouts reduces a marker for the presence of H. pylori by 40 percent. That’s not enough to cure digestive diseases or assure protection against stomach cancer, but it indicates that eating broccoli sprouts regularly might help reduce levels of these bacteria and risks of the diseases associated with them. This same Hopkins team discovered in 2002 that sulforaphane is a potent antibiotic against H. pylori.

The researchers noted that eight weeks after the participants in their study stopped eating broccoli sprouts, the marker for H. pylori returned to pre-treatment levels.

The only sprouts I advise against eating raw are legume sprouts because they contain natural toxins that are only broken down through cooking in water. These include mung bean, lentil, chickpea, and alfalfa sprouts. (The toxin in alfalfa sprouts, canavanine, can harm the immune system. Since cooking turns these delicate sprouts to mush, I advise against eating them at all.) The FDA warns against eating raw sprouts because some outbreaks of E. coli or salmonella have been traced to contaminated seeds. If the bacteria are in or on the seeds, they can flourish during sprouting even under clean conditions. I think that’s unlikely, but I suggest you ask for sandwiches and salads in restaurants and delis to be served without alfalfa sprouts, and if you do eat other bean sprouts, be sure to cook them.