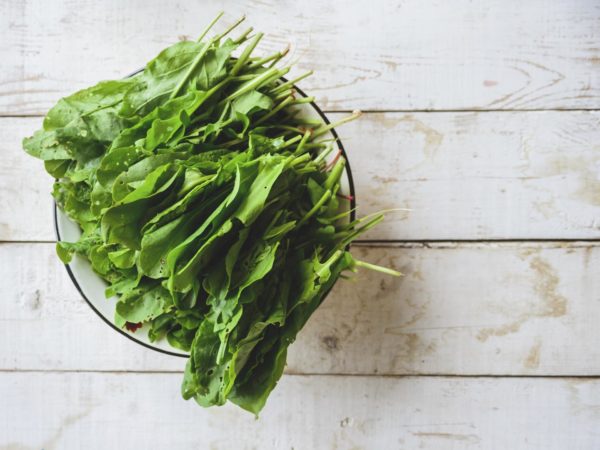 Oxalic acid is a natural product found in spinach and some other plant foods including rhubarb. (Levels are so high in rhubarb leaves that we don’t eat them – they’re poisonous). It imparts a sharp taste to beet greens and chard that I don’t like, especially in older leaves. As for other oxalic acid foods, concentrations of oxalic acid are pretty low in most plants and plant-based foods, but there’s enough in spinach, chard and beet greens to interfere with the absorption of the calcium these plants also contain. For example, although the calcium in spinach is 115 mg per half cup cooked, because of the interference of oxalic acid, you would have to eat more than 16 cups of raw or more than eight cups of cooked spinach to get the amount of calcium available in one cup of yogurt.

However, the oxalic acid in vegetables is broken down in cooking and doesn’t interfere with the absorption of calcium present in other foods, cheese for instance, that you might eat at the same time. Calcium is available from many other food sources – in addition to yogurt, cheese and milk, it is also found in a wide variety of fortified foods including orange juice, soy milk and cereals.

I certainly wouldn’t avoid spinach or other leafy greens because of the oxalic acid effect. Spinach has a lot to offer nutritionally: it’s an excellent source of folic acid, potassium and magnesium, as well as vitamin K, carotenes, vitamin C and lutein, important for healthy eyes.

As far as calcium is concerned, I recommend that women aim for a total daily calcium intake of 1,000-1,200 mg per day from all sources, including supplements of 500 to 700 mg of calcium citrate in two divided doses taken with meals. For men, I now suggest aiming for 500 mg from all sources, and unless they are getting almost no calcium from food, men should not supplement with calcium – high intake has been linked to an increased risk of prostate cancer.