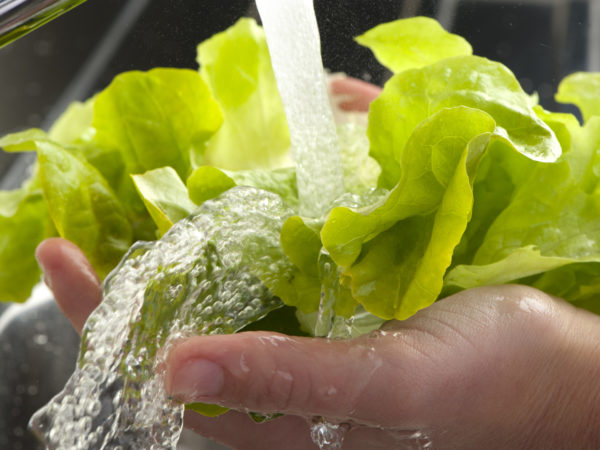 With all due respect to your relative, this is a bogus argument against organic foods. True, there are carcinogenic fungi, but they don’t develop on fruits and vegetables. One of the most troublesome fungal carcinogens found in foods is aflatoxin, produced by certain strains of the molds Aspergillus flavus and A. parasiticus that grow on peanuts stored in warm, humid silos. Peanuts aren’t the only problem sources; aflatoxin has been found in pecans, pistachios and walnuts, as well as milk, grains, soybeans and spices. Aflatoxin is a potent carcinogen, known to cause liver cancer in laboratory animals and may contribute to the incidence of liver cancer in Africa where peanuts are a dietary staple. Aflatoxin occurs in both organic and conventionally grown foods.

I’m not telling you about aflatoxin to worry you, but to point out what foods are most likely to harbor carcinogens from fungi. (The United States government routinely tests crops for aflatoxin and doesn’t permit them to be used here for human or animal food if they contain levels over 20 parts per billion.) Over the years, there have been a number of assaults on organic foods. In 2000, the ABC News program 20/20 carried a report in which experts stated that consumers should be more concerned about bacteria on organic produce than about pesticide residues on conventionally produced fruits and vegetables. However, the report conceded that bacteria can also be found on conventional produce and that both types of fruits and vegetables should be thoroughly washed before eating. Oncologists sometimes worry that the immune-suppressive effects of chemotherapy leave cancer patients more vulnerable to infections, including food-borne ones. Food-borne infections from produce are rare and are just as likely from conventional produce as organic.

Although we don’t yet have many studies demonstrating the differences between organic and conventionally grown foods, proving that one is better than the other, there is evidence of pesticide residues in 71 to 90 percent of conventionally produced foods compared to 13 to 23 percent of organically grown foods. Pesticides are definitely not good for you.

To guard against bacteria (and remove pesticides), carefully wash and rinse berries, green beans, and other fruits and vegetables that you can’t peel and remove the outer leaves of leafy vegetables. Unfortunately, water alone won’t do the trick – use a drop or two of dish detergent in a small tub of water and rinse thoroughly after washing. You should also check the lists of the most and least contaminated crops provided by the Environmental Working Group (www.foodnews.org/walletguide.php).