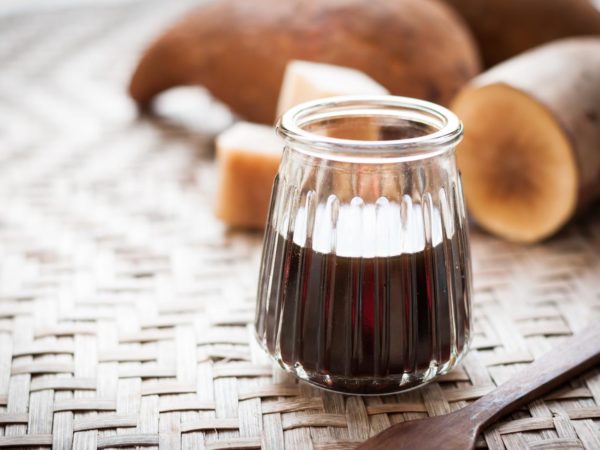 The “potato” you’re referring to is a “yacon” (Polymnia sonchifolia), the root of a plant related to the dahlia. Native to Peru, the yacon is grown elsewhere including New Zealand, Japan, Thailand and Brazil. It is a natural source of oligofructose, a type of sugar that can’t be absorbed by the body. It can be cut up and used like water chestnuts in stir-fries and or dried in the sun to concentrate its sweetness and turn it into a pleasant snack food. Yacon can also be processed to sweeten drinks, syrups, cakes and yogurt. Because we can’t absorb the oligofructose it contains, yacon has been touted as a good sweetener for diabetics. The leaves of the plant can be used to make a tea that doesn’t raise blood sugar levels. In addition, yacon is high in antioxidants, provides large amounts of potassium and promotes absorption of calcium. It is further reputed to have laxative properties and may help protect against osteoporosis.

Oligofructose has been associated with promotion of beneficial bacteria in the colon, which may inhibit the actions of some carcinogenic compounds, but I’ve seen no studies confirming the claim that consuming yacon reduces the risk of colon cancer. I’ve also read that eating yacon helps prevent the build up of cholesterol in coronary arteries but haven’t found any scientific studies supporting this claim.

Yacon has been called a “food of the future” but given its limited availability in this country, I wouldn’t start looking for it in markets just yet. And we still have a lot to learn about the reality of the health claims made for it.