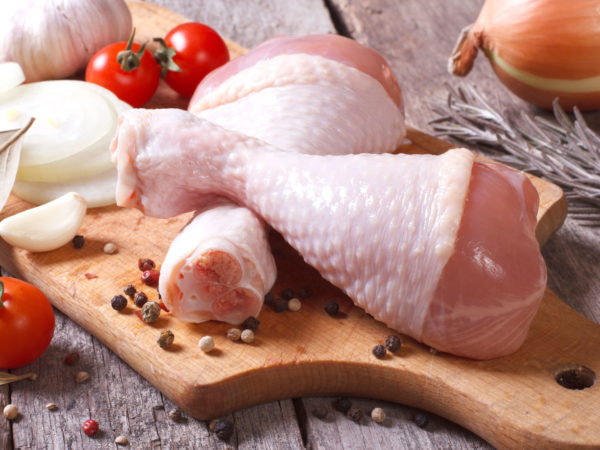 You lose on this one. There is no reason to wash raw chicken before cooking. In fact, by doing so you effectively spread any bacteria on the chicken around your kitchen, enabling them to attach to the next food item you put into the sink or on the counter. In addition, washing is not an effective way to get rid of bacteria on raw foods. If you cook chicken properly – that is, to the correct internal temperature – you’ll kill any pathogens present. The bad bugs most commonly found on raw chicken are salmonella and campylobacter, both capable of making you quite sick.

Despite this long-standing safety advice, the practice of washing chicken before cooking it seems to remain widespread. A recent study from the University of California, Davis found that 50 percent of the participants surveyed did this in the sink before cooking. The researchers used video footage of 120 participants preparing a chicken dish and salad at home to evaluate food safety practices. They found that 85 percent of them served chicken at home weekly and 84 percent said they were knowledgeable about food safety practices. Almost half (48 percent) said they had received formal food safety training. The study found, however, that in practice many of the participants did not take the following food safety measures:

The study also found that 40 percent of the participants did not fully cook their chicken, and only 29 percent knew that the recommended internal temperature of cooked chicken is 165 degrees Fahrenheit. Only 48 percent of the study participants reported owning a cooking thermometer and of those, 69 percent said they seldom used it to make sure chicken is fully cooked. Instead, they judged doneness on the basis of appearance, an unreliable way to make this determination.

Incidentally, in addition to not washing raw chicken, food safety experts say you shouldn’t wash raw beef, pork or fish – the same dangers apply. And, by the way, be sure to treat organic chicken as you would conventionally raised chicken. Research suggests that there is no significant difference between the presence of salmonella and campylobacter on organically raised chicken (and turkey) versus conventionally raised poultry.

The UC Davis study is scheduled for publication in the September/October 2014 issue of the journal Food Protection Trends.