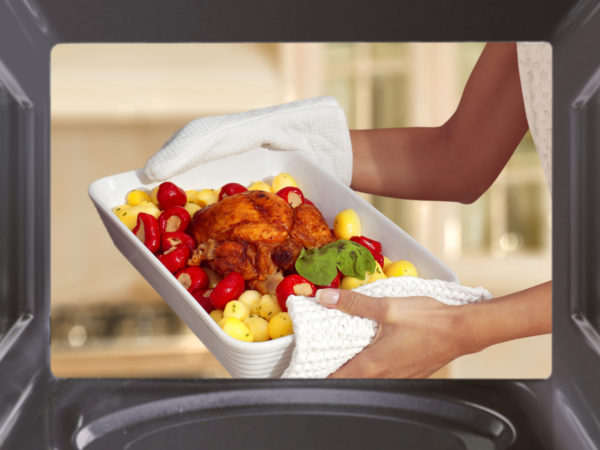 It depends. For some vegetables, heat processing actually boosts antioxidant levels. A study published in the Journal of Agriculture and Food Chemistry in September of 2000 reported that pureed, heat-processed carrots had 34.3 percent higher antioxidant levels than their raw counterparts. But for other veggies, no matter how you cook them – whether you microwave, boil or steam – you’re likely to lose some of the nutrients. A study published in the November 2003 issue of the Journal of Science of Food and Agriculture found that broccoli cooked in the microwave lost up to 97 percent of its antioxidant content. However, in this study, the researchers used 10 tablespoons of water for cooking the broccoli. When the Spanish researchers tested broccoli after steaming, they found that it had lost only 11 percent of its antioxidant content. You don’t have to use a lot of water when cooking vegetables in the microwave – a couple tablespoons will do and you don’t have to add any water when microwaving frozen vegetables.

Cornell University researchers also looked into this issue and found that spinach cooked in the microwave retained nearly all its folate but lost about 77 percent of the nutrient when cooked on the stove. These same researchers discovered that microwaved bacon had significantly lower levels of carcinogenic nitrosamines than bacon that was cooked the usual way.

All that said I don’t cook vegetables or anything else in the microwave. I usually steam or stir fry vegetables, and I use a microwave only for defrosting or rapid reheating of leftovers.

Microwave ovens are a great convenience, but you do have to be aware of potential dangers. Don’t heat foods in plastic containers or covered by plastic wrap: microwaving can drive plastic molecules into your food. Use only glass or ceramic containers and cover foods with waxed paper or a paper towel.

Always be careful when microwaving. Unevenly heated foods may contain hot spots that can scald your mouth and throat (be especially careful when heating foods for babies or young children). Whole eggs cooked in microwaves have been known to explode on contact with cold air when the oven door is opened and the scalding hot, flying bits can cause nasty injuries. Boiling water in the microwave presents the same danger; it can splatter when you open the door.