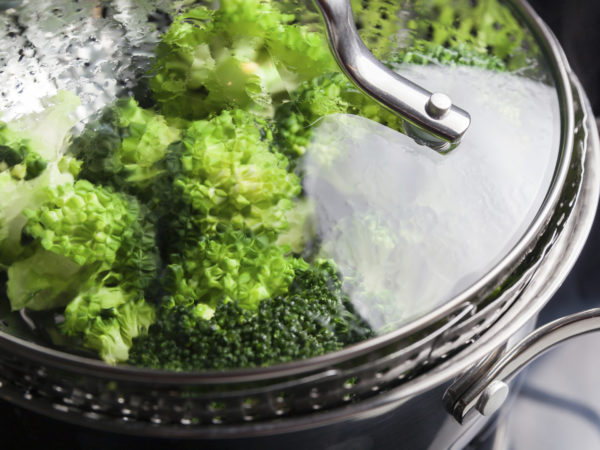 It depends – on the vegetable. I steam many of the vegetables I cook in my own kitchen, such as snow and snap peas, greens, and artichokes. Steaming uses little energy, creates a minimum of mess and does the least damage to the nutrients in vegetables. Chinese cooks steam a variety of foods including fish, dumplings, buns, the “pancakes” they use as wrappers, and even some desserts – all good ideas.

Another of my favorite cooking techniques is “steam frying” – this involves sautéing food briefly in a little oil, then adding some water, stock or wine, covering the pan, and allowing the food to cook until it is almost done. You can then uncover the pan and quickly boil off as much of the remaining liquid as you wish. I like this method for broccoli and cauliflower, for example.

I tend to boil less delicate vegetables such as corn on the cob, potatoes and beets. Boiling tender vegetables will result in the loss of some of their nutrients in the cooking water.

No matter how you cook vegetables you’re likely to lose some nutrients. A study published in the November 2003 issue of the Journal of the Science of Food and Agriculture found that broccoli cooked in the microwave lost up to 97 percent of its antioxidant content but lost only 11 percent when it was steamed. Another study showed that spinach cooked in the microwave retained nearly all its folate but lost about 77 percent of this nutrient when cooked on the stove. (I imagine it was over cooked. I like to steam-fry spinach for just a few minutes until it is bright green and just wilted.)