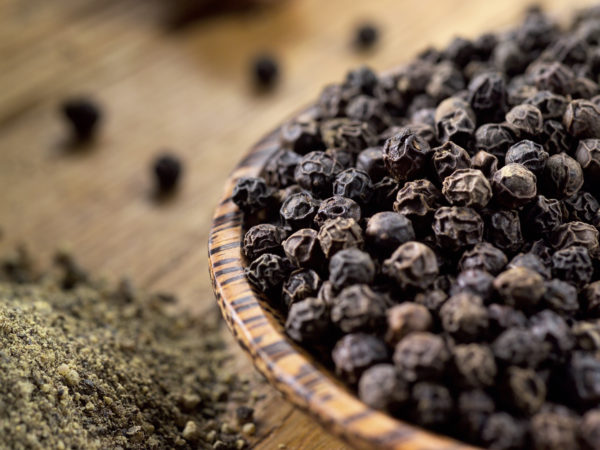 Maybe, but you would have to use an awful lot of pepper for a long time to run into trouble. The concern about pepper arises from one of its components, safrole, also found in small amounts in star anise, nutmeg, witch hazel, and basil. In the 1960s, the FDA banned the use of safrole in food in the United States after it was found that injecting large amounts caused liver cancer in lab rats. Perhaps the biggest effect of this ban has been to eliminate the use of sassafras root in the making of root beer. Volatile oils found in the bark of the root of the sassafras plant are 80 percent safrole. Nowadays, sassafras can be used as an ingredient in root beer only if the safrole is removed through a laboratory extraction process.

Black pepper is the most popular spice in the world, and black, green and white peppercorns all come from the black pepper plant (Piper nigrum), native to Asia. Black is the whole, partially ripened fruit; green is the unripe fruit; and white is the peeled seed.

I’m not that concerned about safrole. Eating moderate amount of it in plant products (such as sassafras tea) is not comparable to injecting large amounts of the pure chemical into the abdomens of rats. But black pepper can be an irritant of the GI tract, urinary tract, and prostate, and I don’t think it should be consumed frequently in quantity.

I generally don’t let waiters grind their pepper mills over my food at restaurants until I taste it first. For a hot spice, I prefer red pepper, which comes from a different plant (Capsicum spp.), doesn’t have any natural carcinogenic activity, has a long history of medicinal use, and provides healthful carotenoids. It can help lower cholesterol and stimulate circulation, and can actually help heal the lining of the stomach.

While we’re on the subject of pepper, you should know that pink peppercorns are not true pepper. They’re the dried berries of the Brazilian pepper tree (Schinus terebinthfolius) and have become popular despite questions about their safety. Pink peppercorns can cause symptoms resembling those of poison ivy/oak, as well as headaches, swollen eyelids, shortness of breath, chest pains, sore throat, hoarseness, upset stomach, diarrhea and hemorrhoids. I avoid them.

Finally, Sichuan peppercorns, used in East Asian cuisine, are the dried fruits of the prickly ash tree (Zanthoxylum piperitum). They have an interesting numbing effect on the tongue in addition to a peppery flavor, and their toxicity appears to be minimal.