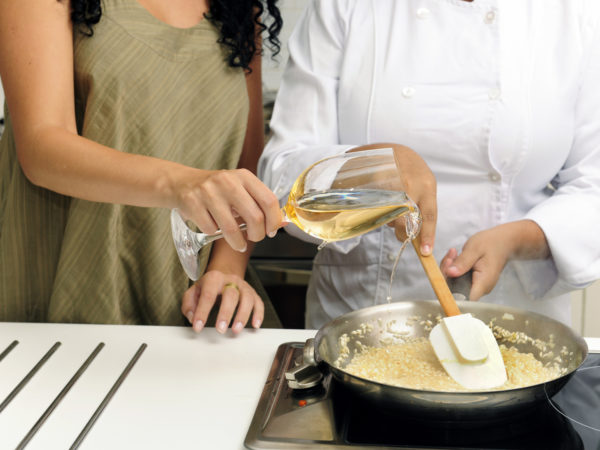 Wine, spirits, and beer are used in cooking to enhance the flavor and aroma of dishes. Contrary to what most people believe, the entire alcohol content doesn’t always evaporate or boil away before the food is served. A study from the U.S. Department of Agriculture’s Nutrient Data Laboratory showed that it can take longer than two and a half hours for all the alcohol to be cooked out of food to which wine or some other alcoholic beverage has been added. The study showed that the amount of alcohol remaining depends in part on the cooking method. For example, after brandy has been “flamed” – poured on foods and then set alight – approximately 75 percent of the alcohol remains after the flames have died down.

The study also revealed that alcohol content diminishes with cooking time. After being added to food that then is baked or simmered for 15 minutes, 40 percent of the alcohol will be retained. After cooking for an hour, only about 25 percent will remain, but even after 2.5 hours of cooking, five percent of the alcohol will still be there. Of course, the amount of alcohol in an individual serving will be quite low.

People need to avoid alcohol for various reasons, such as to guard against alcoholic relapse, to protect a fetus, or to avoid adverse reactions that might be brought on by certain medications. The best bet for such people would be to ask if a particular dish is cooked with wine or spirits before ordering in a restaurant. If you’re a dinner guest, you could let the host or hostess know in advance that you’re avoiding alcohol in food as well as drink.