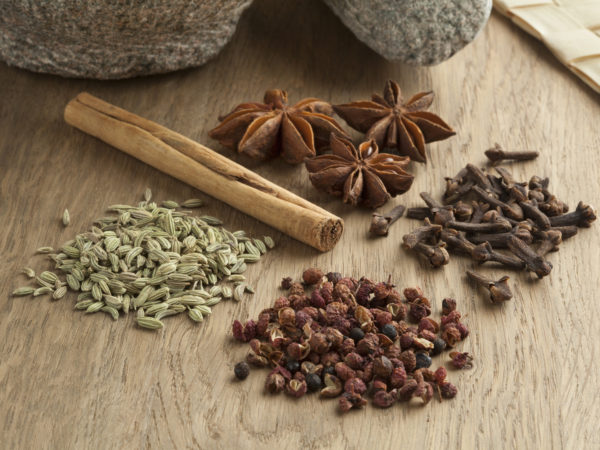 Chinese five-spice powder is a mixture of ground spices, traditionally equal parts of cinnamon, cloves, fennel seed, star anise and Sichuan (another spelling for Szechwan) peppercorns. Some versions of five-spice powder include ginger, nutmeg, or orange peel or use black peppercorns in place of the Sichuan variety. In Chinese restaurants, five-spice powder is mostly used in rubs for meats and seafood. It also adds warm flavor notes to marinades and sauces.

The components of five-spice powder have many health benefits.

Cinnamon is a well-known anti-inflammatory and anti-microbial agent. It has also been studied for an anti-clotting effect on blood platelets. Cinnamon appears to slow the rate at which the stomach empties after meals, which evens out blood sugar highs and lows. Some research has suggested a therapeutic use of cinnamon for type 2 diabetes, as it appears to improve the body’s sensitivity to insulin. One study published in 2003 in the journal Diabetes Care, found that consuming as little as one gram of cinnamon daily reduced blood sugar, triglycerides, LDL (bad) cholesterol, and total cholesterol in people with type 2 diabetes. Since then, other studies – but not all – have linked cinnamon to better blood sugar control and lower cholesterol levels. Further research is needed.

Cloves are native to Indonesia. Both cloves and clove oil have been used in Asian cooking for more than 2,000 years. Arab traders introduced cloves to Europe in the fourth century, and their pungent flavor was used in the Middle Ages to mask the sour or bitter taste of poorly preserved foods. Today, most cloves are grown in Zanzibar, in Eastern Africa.

Medicinally, the most studied compound found in cloves is eugenol, a primary component of its essential oil. It has potent anti-inflammatory effects and may help lower the risk of digestive tract cancers and reduce joint inflammation. Oil of cloves is also used for its  anesthetic and anti-bacterial properties to relieve toothache. It is also believed to improve circulation and digestive disorders, to relieve tension headaches, even to freshen breath and repel insects. The spice has been used in some cultures as a male aphrodisiac;  it has been suggested as a treatment for erectile dysfunction and premature ejaculation, though more research is needed to confirm efficacy for any of these uses.

The health benefits of fennel seed come from its unique combination of phytonutrients including the flavonoids quercetin and rutin, both potent antioxidants,and anethole, which has been shown in animal studies to have anti-inflammatory and cancer protective effects.  Historically, fennel has been used orally to address women’s health concerns such as increasing lactation, facilitating birth and promoting menstruation. (Consult your physician before using fennel for these problems.) It has also been used to address backache, low libido, loss of appetite, and colic in babies.  Fennel is a well-known remedy for flatulence and other gastrointestinal disorders.It is a good source of fiber, folate and potassium.

Star anise, is the fruit of an evergreen tree native to southwest China. It contains an essential oil similar to that of anise seed. Although the two are botanically unrelated, both have a strong, sweet, licorice flavor. Whole star anise is used as a flavoring for tea, soups and marinades in Vietnam, China and other southeast Asian countries.

Star anise has been used medicinally for respiratory tract disorders. (It is a good source of shikimic acid, a component of the flu treatment Tamiflu.) It has also been used to treat digestive problems, including upset stomach and gas, to increase the flow of milk in nursing mothers, promote menstruation, ease the pains of childbirth and boost libido in men. However, there’s not a lot of scientific evidence to support these uses.

Sichuan peppercorns are the outer peel of berries of the prickly ash tree (Zanthoxylum simulans) in the citrus family. They are not pungent like black pepper; instead they have a lemony flavor and produce a distinct numbing sensation on the tongue. In some parts of Asia, people regard the spice as a remedy for digestive problems.

Just a touch of Chinese five-spice powder can give a distinctive depth of character to dishes. You can also sprinkle it on chicken or meat for a great new taste. Buy prepared five-spice powder in Asian food stores or online or make it yourself by fine-grinding the ingredients in a coffee grinder or blender. Stored in an airtight container it will keep for up to two months.