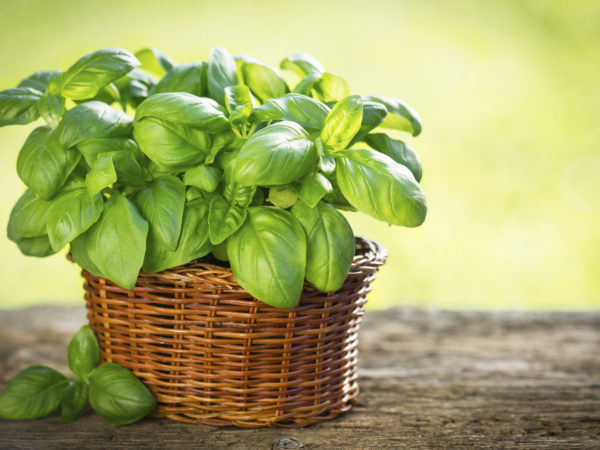 Basil (Ocimum basilicum) is a leafy, fast-growing, fragrant plant that is part of the mint (Lamiaceae) family. The name “basil” has its roots in the Greek word, basilikohn, which means “royal” or “king” – possibly because the herb has long been considered noble and/or sacred. Basil is still held in high regard today for both its culinary and medicinal uses, and is vigorously cultivated and crossbred – more than 60 varieties have been created, emphasizing diverse flavors and properties.

Basil is native to India, Asia and Africa, but now grows in regions around the world, and is closely associated with the cuisines of Thailand, Vietnam, Laos and Italy.

Medicinally, basil has a variety of health-protective effects: it has been used orally to treat stomach spasms, insect bites, colds, fever and respiratory infections. The essential oil of basil can be used in aromatherapy as both a stimulant and an antidepressant.

Basil is mainly known for its antioxidant flavonoids that help protect the body on a cellular level, and for its volatile oils that are effective antimicrobial agents. A study published in the Journal of Microbiology Methods reported that the essential oil of basil inhibited strains of widespread and difficult-to-treat bacteria including Staphylococcus, Enterococcus and Pseudomonas. Another study published in Food Microbiology reported that produce washed in a one percent solution of basil (or thyme) resulted in lower numbers of shigella, an infectious bacterium that causes diarrhea.

Basil also has potent anti-inflammatory effects: its volatile oils contain eugenol, a substance that has been shown to block cyclooxygenase – the same enzyme that is inhibited by non-steroidal anti-inflammatory medications (NSAIDS) such as ibuprofen.  Basil may also have blood-sugar-lowering effects, and so caution should be taken when using medicinal amounts in people with diabetes, obesity or metabolic syndrome.

Nutritionally, basil is very good source of vitamin A, magnesium, iron and calcium.

From a culinary standpoint, basil may be the world’s most cross-cultural spice. Chefs and home cooks around the globe use it for everything from flavoring fresh salads, sauces and fish to creating dips such as pesto and pistou (a French variation on pesto that lacks pine nuts). Basil can complement desserts including ice cream, and provide a new dimension to drinks typically flavored with mint.

The taste of sweet basil is bright and lively, but other varieties offer their own notes of flavor such as lemon, lime and anise. When cooking with fresh basil, remember that its oils are highly volatile and evaporate quickly if overheated – add it at the end of the cooking process for best texture and flavor.

Fresh basil is almost universally regarded as better to use the dried version. When choosing, look for full, green leaves, and store in the refrigerator wrapped in a slightly damp paper towel where it should last up to five days. You can also freeze basil in airtight containers, or immerse it in water or stock and freeze in ice cube trays. Fresh basil is also easy to grow, even in small, indoor herb gardens. Dried basil should be stored in a tightly sealed glass container in a cool, dark place for up to six months.

Basil is a staple in my garden, kitchen and restaurants. It adds a fresh flavor to cooked and uncooked meals alike. In India, it’s used medicinally to fight colds and other infections and is applied topically for minor cuts and scrapes. In addition, studies have shown that a wash of one-percent basil essential oil effectively eliminates bacteria on fruits and vegetables, and is much friendlier to the environment than many commercial washes.

With over 60 different varieties to grow and use, it’s easy to experiment with fresh basil: add to sandwiches, salads, sauces, eggs – or even ice water – for a unique, refreshing flavor.