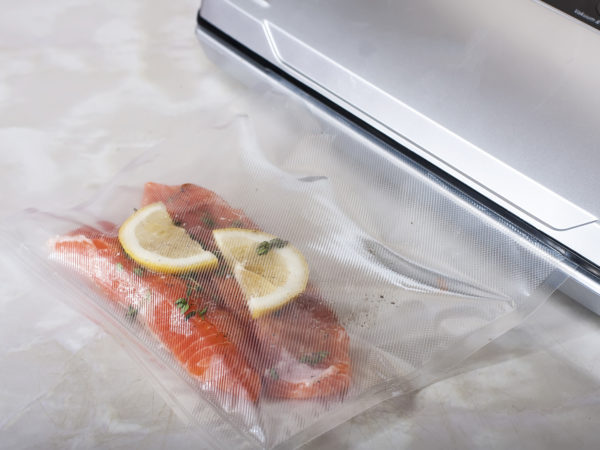 “Sous vide” is French for “under vacuum” and is a precision cooking method in which raw food is cooked in vacuum-sealed plastic bags at low temperatures for long periods of time. While more suitable (at the present time) for restaurants than for home cooking, “sous vide” has been touted as a monumental culinary advance. In fact, an article in The New York Times quoted a chef who described the technique on a par with the invention of the food processor and the gas stove.

A number of chefs in Europe and the United States feel that cooking “sous vide” captures the flavor, juices, and aroma of food that mostly escape into the air with other cooking methods. According to the Times, low temperatures make for “extremely succulent food because there is virtually no loss of natural juices.”

Perhaps the best known proponent of sous vide cooking in the U.S is Thomas Keller, the famed chef/proprietor of two celebrated restaurants, the French Laundry in California’s Napa Valley and Per Se in Manhattan. Keller has written a book on the subject, Under Pressure: Cooking Sous Vide (Artisan 2008), which is aimed at professionals and probably won’t be much use to home cooks who don’t have the very expensive equipment needed for this method. However, Keller’s book may be of interest to foodies who want to keep up with the latest developments in cuisine.

As far as safety and health are concerned, vacuum packaging prevents evaporation of flavor and moisture during cooking and inhibits off-flavors from oxidation. It also reduces growth of many bacteria. Concerns that cooking in bags at low temperature would be a “recipe for botulism” have been assuaged by Bruno Goussault, a scientist and engineer who trains top chefs in cooking sous vide. According to the Times, Goussault has proved that long cooking times followed by proper cooling kill bacteria with the same effectiveness as higher temperatures and also stabilize food so that it can be stored longer before serving.

As for the danger that toxins from the plastics might leach into foods, chef Keller said in an interview that the bags used for sous vide cooking are food- and heat-safe. I haven’t been able to find any information on the type of synthetics used for this cooking method, but most bags designed for other cooking methods appear to be safe as long as they are used as intended, for single use only.

In Europe some top chefs have been selling lines of convenience foods cooked sous vide, and those products may be the way most consumers elsewhere eventually will encounter sous vide meals. In the U.S. some chain restaurants have begun to adopt the method. Sous vide cooking may also transform airline food some day. We’ll see.