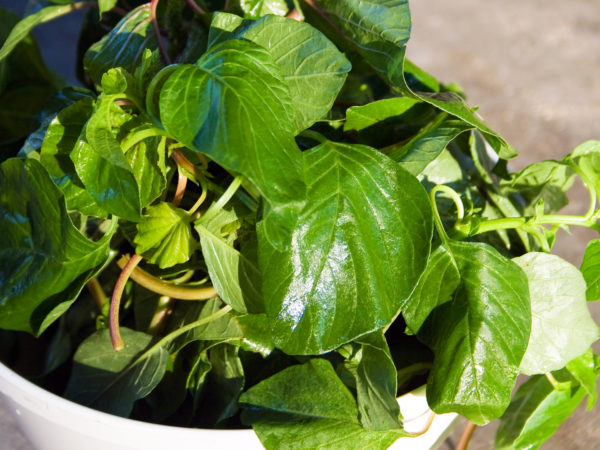 Chaya (Cnidoscolus chayamansa) is a shrub native to Mexico’s Yucatan peninsula. It is also known as tree spinach. The plant was introduced into the United States from Cuba years ago and now grows wild in Florida and Texas, but the leaves and shoots are seldom used here as a vegetable. In some parts of Mexico, chaya is eaten and also used as a herbal remedy, but I’ve read that many Mexicans are unfamiliar with it.

Chaya is quite nutritious; it does, indeed, provide more protein, calcium, iron, vitamin C, and carotenes than spinach. The leaves have also been used traditionally for treatment of a wide variety of ailments including obesity, kidney stones, hemorrhoids, acne, eye problems, and as laxatives and diuretics and to stimulate circulation, improve digestion and strengthen fingernails. However, none of these traditional uses has been studied scientifically. The only study of which I’m aware showed that chaya tea administered to diabetic rabbits lowered blood glucose levels, but these results were considered preliminary, and I’ve been unable to find any follow-up studies.

Like several other plants and leafy vegetables, chaya leaves contain hydrocyanic glycosides, which are toxic compounds, but they are easily destroyed by cooking. Chaya is traditionally cooked for 20 minutes and served with butter or oil. The reason it shouldn’t be cooked in an aluminum pot is the possibility of a toxic reaction that can result in diarrhea.

I’ve eaten chaya and liked it. If you’re careful about cooking it, there’s no reason not to try it, but I’m not sure how easy it is to get here. It’s said to be simple to grow, so if you’re a gardener, you may want to grow your own.