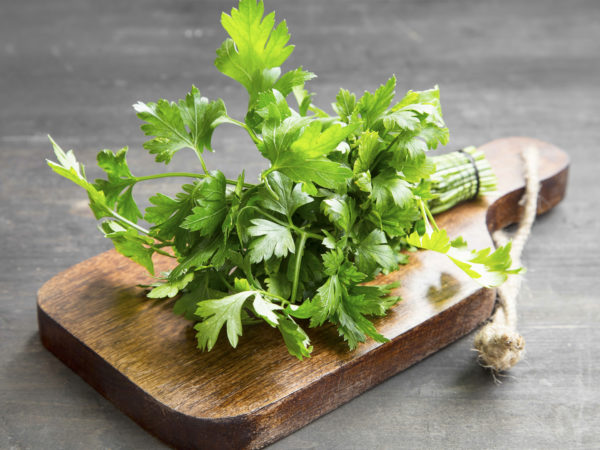 Parsley is an herb native to the central Mediterranean region. It is now cultivated worldwide. In temperate climates it is a biennial (flowering every two years) and in subtropical and tropical climates it is an annual. There are two types, curly and flat leaf, both with bright green leaves. The leaves, seeds, oil and root of the parsley plant are used for medicinal and culinary purposes.

Traditionally, parsley has been used to treat a variety of gastrointestinal concerns, as a diuretic, to help stimulate the appetite, and to increase menstrual flow. Chewing the fresh leaves is a traditional, effective breath freshener, and chewing the seeds can reduce gas and bloating.

Parsley can be applied topically to the skin to help address chapped and cracked skin, insect bites, and bruises. It is a good source of flavonoids and antioxidants, as well as folic acid and vitamins A, C and K.

Parsley is a rich source of vitamin K, which assists blood clotting. Consequently, it may decrease the effectiveness of warfarin and other blood thinners. As parsley is a natural diuretic, avoid taking it with water pills to minimize the risk of dizziness and a drop in blood pressure. Do not take with lithium because of its diuretic effects.

In amounts typically consumed as part of meals, parsley is likely to be safe for women who are pregnant, but larger, concentrated amounts found in supplements should be avoided during pregnancy to minimize the risk of miscarriage. People with kidney disease should also avoid large amounts of parsley. For the general population, very large amounts of parsley can lead to side effects such as anemia, liver or kidney problems, and some people may have an allergic reaction to parsley seed oil when it is applied to the skin.

The dose for children is not known.