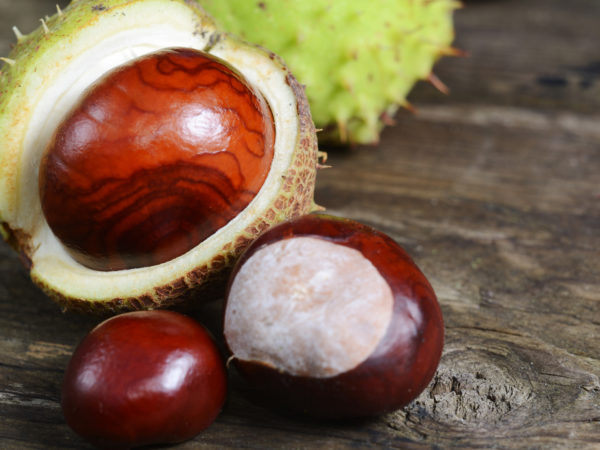 Horse chestnut, also known as buckeye and Spanish chestnut, the seeds, leaves, bark and flowers of horse chestnut trees have long been used medicinally. The trees are native to Eastern Europe but can be found throughout the Northern Hemisphere. Though it is sometimes referred to as buckeye, it is not the same species as that of buckeye trees that grow in Ohio and California.

Horse chestnut seed extract has been extensively studied for chronic venous insufficiency (CVI), a circulation problem in which the veins do not efficiently return blood from the legs to the heart. This condition is associated with varicose veins, pain, ankle swelling, itching, and nighttime leg cramping. A review of all the clinical trials concluded that the evidence suggests that horse chestnut seed extract is an efficacious and safe short-term treatment for CVI. One study actually found it as effective as compression stockings.

Horse chestnut extract might slow blood clotting, increasing the risk of bruising and bleeding in people taking aspirin, ibuprofen, coumadin or other drugs that slow clotting.

Horse chestnut may slow the process by which the body eliminates lithium, a drug used to treat the manic side of bipolar disorder. This effect could lead to serious side effects.

Raw or unprocessed horse chestnut seeds, leaves, bark, or flowers contain aesculin, a compound that is poisonous if consumed in teas or remedies made with raw or unprocessed seeds, leaves, bark or flowers. Symptoms include nausea, vomiting, diarrhea, salivation, headache, break down of red blood cells, convulsions, and circulatory and respiratory failure possibly leading to death. (Properly processed horse chestnut seed extract contains little or no aesculin and is considered safe for short-term use.)

Horse chestnut has been widely used in Germany for decades, and in all that time, there have been no reports of serious harmful effects from properly prepared products.

The recommended dosage for treatment of varicose veins or CVI is 100-150 mg aescin per day; look for horse chestnut seed extracts that will provide this in two to three doses.

The safety of horse chestnut in children has not been established.

I generally recommend horse chestnut seed extract (HCSE) for treatment of varicose veins. This remedy is believed to work similarly to grape seed extract in reducing pain and swelling in the legs, but has been more extensively studied. The major active ingredient in HCSE is believed to be the compound aescin, which helps support normal vessel-wall functioning. Horse chestnut is a promising alternative, and clinical studies have demonstrated that supplementing with horse chestnut seed extract may help relieve the pain and swelling of varicosities. The seeds’ active compounds appear to inhibit enzymes that can damage capillary walls, and this also helps strengthen veins.