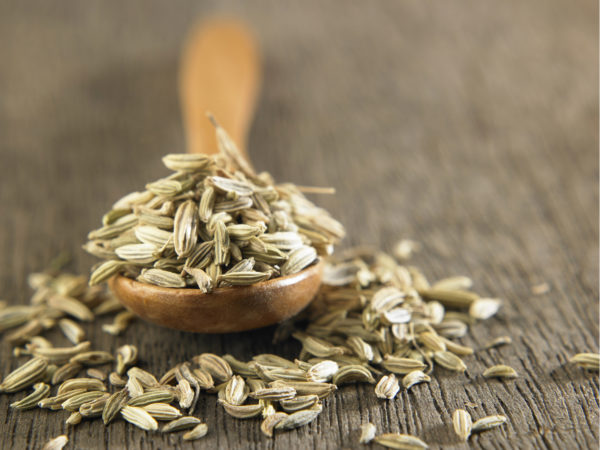 Cumin (Cuminum cyminum) is part of the same flowering plant family as caraway, dill and parsley. The cumin seed is native to the East Mediterranean and India, and has been revered by both cooks and healers for centuries. In Egypt it was used as currency to tithe to priests, as a culinary spice and as a preservative agent to mummify pharaohs. The vaguely peppery flavor of cumin made it popular in the days of spice-trading ships linking Europe and Asia, as it was a good substitute for rare and expensive black pepper. Cumin became recognized as a symbol of fidelity and love, playing a ceremonial role in weddings and other rituals, and was thought to have aphrodisiac properties.

Today cumin is closely associated with Indian and Middle Eastern cuisines and is one of the main components of curry powder.

Medicinally, cumin and its seeds have been used historically to treat digestive upset. Recent research has looked at the health benefits of cumin, including cumin’s ability to stimulate secretion of pancreatic enzymes necessary for proper digestion and nutrient absorption. Cumin is also an excellent source of iron, making it a good metabolic support for efficient energy production and robust immunity.

Nutritionally, in addition to being an excellent source of iron, cumin seeds are also a good source of manganese, calcium and magnesium.

As a culinary spice, cumin is available in whole seed and ground form. The whole seed is oblong in shape with longitudinal ridges, and yellow-brown in color similar to caraway seeds. It maintains its flavor in storage longer than ground cumin, and is easily ground with a mortar and pestle. Whole seeds should be lightly roasted before use in recipes to get the best flavor and aroma. When kept in a tightly sealed glass jar away from heat and light, whole seed cumin will last for up to a year, while ground cumin will last up to six months.

Cumin can add a complex, savory undertone to a variety of dishes, including meats, stews, chilis, vegetables, rice, pasta, and legumes. It can also be used in warm beverages to add a spicy kick.

Dr. Weil’s take:
When cooking beans, add a few cumin seeds to the water to help reduce the gas-producing properties associated with legumes. Cumin adds a distinctive flavor to Mexican cuisine and is a staple in my kitchen. I never make lentil soup without cumin powder. Paired with citrus, it brightens grilled fish and makes egg dishes extraordinary. Toss a little cumin, olive oil and chopped garlic into plain couscous for a quick and tasty side dish.

Try these recipes with cumin: