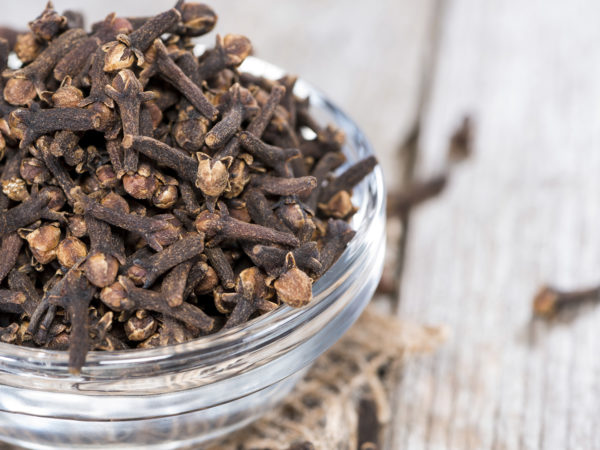 Cloves (Syzygium aromaticum or also, Eugenia caryophyllus) are the unopened buds of the pink flowers of the evergreen clove tree. Their name comes from the Latin word “clavus,” which means “nail” – a nod to their appearance, as dried cloves feature a head with tapered stem, resembling a nail. Though pink when fresh, cloves are most commonly purchased once they have dried and turned brown.

Cloves are native to Indonesia, and both cloves and clove oil have been used in Asian cooking for over 2,000 years. Arab traders introduced cloves to Europe in the fourth century, and their pungent flavor was used in the Middle Ages to mask the sour or bitter taste of poorly preserved foods. Today, most cloves are grown in Zanzibar, in Eastern Africa.

Medicinally, the most studied compound found in cloves is eugenol, aprimary component of its volatile oils with potent anti-inflammatory effects. Eugenol may help lower the risk of digestive tract cancers and reduce joint inflammation. Extracts from cloves have also been used for their mild anesthetic and anti-bacterial properties to alleviate dental pain. The health benefits of clove can be achieved using extracts of clove oil, available over-the-counter as throat sprays and mouthwashes.

Cloves have been used to improve circulation and digestive disorders, to deal with tension headaches, even to freshen breath and repel insects. The spice has been used in some cultures as a male aphrodisiac – it has been suggested as a treatment for erectile dysfunction and premature ejaculation, though more research is needed to confirm efficacy for any of these uses.

Nutritionally, cloves are an excellent source of manganese, as well as fiber, vitamin K, vitamin C, calcium and magnesium.

You can buy cloves whole or ground. Whole cloves keep their flavor longer, and are easily ground in a coffee grinder (buy one dedicated to the purpose of grinding seeds and spices). You can tell if whole cloves are fresh by pushing your fingernail into the head: a fresh clove will release some of its fragrant oils. You can also determine which cloves are fresh by putting them in a cup of water: fresh ones will float vertically, whereas stale ones will float horizontally or sink.

Whole or ground cloves should be stored away from light or heat in a tightly sealed glass container. Ground cloves will last up to six months, while whole cloves will stay fresh for about one year.

Dr. Weil’s take:
The warm, sweet-spicy taste of cloves is versatile. Around the world, cloves flavor meats and stews, rich sauces such as Mexican mole, warm beverages like cider and chai tea, pickled vegetables, breads and cheeses, and sweet desserts such as pies and fruitcakes. Be aware that cloves have an intense flavor – a little goes a long way.

Cloves stuck into an orange (also know as a clove pomander) create a lovely fragrance in the home and may actually deter flies and other insects, naturally! One of these will work for about six months if hung from a string, and about three or four months set in a ceramic dish on the counter.

Try cloves in these recipes: