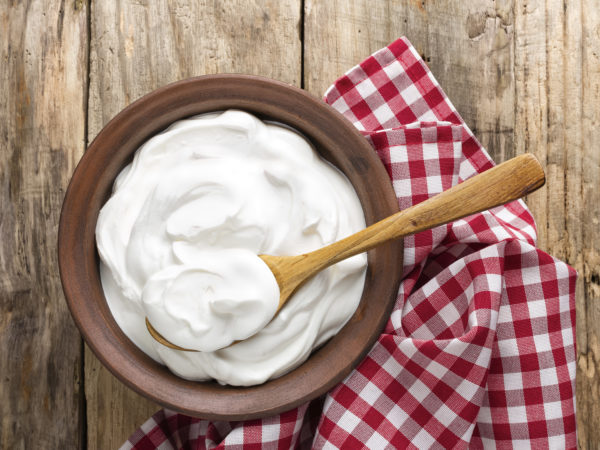 The most obvious differences between Greek yogurt and the yogurt we’ve been accustomed to over the years are taste and consistency. Greek yogurt is thicker, tangier and less sweet than common supermarket brands (although national brands with familiar names are getting into the Greek yogurt act).

Greek yogurt is thicker than regular yogurt because it is strained repeatedly to remove the liquid whey (a protein that constitutes about 20 percent of total milk protein) as well as some of the lactose and sugar. Because a great deal of water is removed, it also much higher in protein – about twice the amount you would get from other yogurts, and it has only half the sugar content (but about the same number of calories).

Six ounces of Greek yogurt gives you 15 to 20 grams of protein, compared with nine grams in regular yogurt. The protein in Greek yogurt is about what you would get from two to three ounces of lean meat.

Greek yogurt is lower in carbohydrates than regular yogurt – only five to eight grams per serving compared to 13 to 17 grams. And because some of the lactose is strained out, people who are lactose intolerant may be able to eat it without ill effects. Greek yogurt is also lower in sodium than the regular kind – only 50 mg, which is about half the amount in regular yogurts. However, it is also a bit lower in calcium than regular, giving you only about 20 percent of the recommended daily allowance as opposed to 30 percent for regular yogurt.

This should not pose a problem, because you don’t need to rely on dairy foods for calcium. You can get all you need from collards, broccoli, mustard greens, kale, and bok choy; canned salmon and sardines (with bones); tofu that has been coagulated with a calcium compound; calcium-fortified soymilk, fruit juice and cereals; and blackstrap molasses.

I no longer recommend choosing only low-fat dairy products, so go for full-fat Greek yogurt. My thinking on this issue has evolved as scientific studies have shown that some forms of saturated fat do not play the harmful role we thought it did in coronary heart disease and as evidence mounts that nonfat and low-fat dairy products may cause problems.